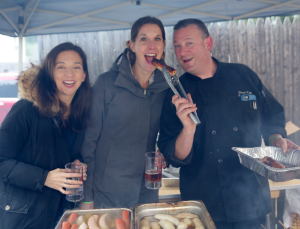 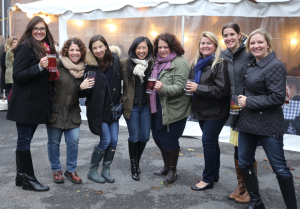 The Junior League of Pelham held its 3rd annual Oktoberfest Celebration on Saturday, October 3rd. After four consecutive days of rain and the threat of Hurricane Joaquin still looming, nearly 150 Pelhamites and friends bundled up in winter jackets and ventured out for this town tradition. The parking lot outside the Fisherman’s Net was transformed into Pelham’s very own German festhaus – with Depot Dave grilling up a delectable spread of German delights, the Net’s wonderful staff filling stein after stein of Oktoberfest brew and DJ Edwin piping in festive tunes. Aside from the usual Oktoberfest merriment, 32 teams competed in the inaugural – yet sure to be a main stay – beer pong tournament. While the event was slated to end at 8pm, the tournament went well into the evening, with the last two teams vying for the highly coveted beer pong trophy, as well as two generous gift baskets donated by DeCicco’s and Esquire magazine. Guests departed with full bellies, empty steins, new friends and smiles from ear to ear. What a great way to kick-off fall in Pelham!

All proceeds from the Oktoberfest Celebration go to support the Junior League of Pelham’s outreach programs aimed at improving the lives of families, and promoting the enrichment of Pelham and neighboring communities. The Junior League of Pelham would like to thank everyone who came out to support the League to make Oktoberfest a success once again. Special thanks to Richie and The Fisherman’s Net, Depot Dave, OnPoint Image & Design, DeCicco’s and Esquire magazine. Until next year!